Many of our clients face the rigamarole of Social Security or Disability claims appeals.  In this frustrating mess, they often find themselves asking this question.

“Is a Mental Health Impairment More Likely to Qualify for Social Security?”

In and of itself, a question about how an impairment will factor into a Social Security claim is a great question to ask.  Though it’s a really tough one to answer, objectively.  To answer it, we have to go about answering multiple questions that are implied by the question and necessary to understanding the scope of the response.

Specifically, we need to make sure we take a look at:

Mental and Physical Health According to the Social Security Administration

For the sake of answering this question and the analysis that was involved, the impairments were classified by Social Security under the “Primary and Secondary Diagnosis by Body System” chart at this link.

Physical health impairments would then, generally, be anything else. 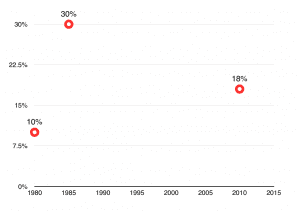 In general, that’s a trend upwards.  But more recently, for the last 30 years, a downward trend.  Why?  A couple of possible reasons with the caveat that the data we could find was not entirely clear here.  A great guess would be the correlation between mental health diagnosis in the 1980’s and early 1990’s and substance abuse.  In our article, Social Security Myth #3: “The vast majority of present recipients are on drugs but otherwise fine” we covered the history of concurrent substance abuse and eligibility for disability and SSI benefits.  In summary, at the same point in time where MH conditions accounted for a drastically risen rate of disability claims, disability and Social Security as a whole were seeing drastically increased claims with substance abuse as a cornerstone of those claims.

Once substance abuse was removed as a mental health diagnosis for Social Security claims, it was an easy conclusion to follow that the number of Social Security claims based off mental health diagnosis diminished by a similar amount.   Still, this is only a guess.  And whether true or not, it really doesn’t answer what’s going on today and how that matters to someone going through a claim.

So, what is going on today?

Today, in the second half of the 2010s, there’s an interesting disparity between the basis of approved claims in Disability (SSDI) vs Social Security (SSI).

Looking at the data above, it seems that there is a strong correlation between the program sought from Social Security and the underlying impairment.  A full 60% of awarded claims for SSI are mental health related.

To some degree, this probably isn’t much of a surprise.  Historically, certain physical impairments correlate with a higher likelihood of significantly gainful activity than a given mental impairment.  For example, say..chronic knee pain vs chronic depression.  However, the reality of each person’s circumstance is a bit more nuanced and making judgments based on diagnosed impairment is an excellent way to screw up advocating for others.  Who’s to say that one form of the disabling condition is worse than another (knees vs effect, for instance)?  It’s always relative to the person experiencing it.

In the Employment, Earnings, and Primary Impairments Among Beneficiaries of Social Security Disability Programs Study that is heavily cited in this article, it was stated:

This really cuts to the heart of the third piece, understanding the history of claims denials.

The History of Claims Denials

We already know that when looked at as a whole, claims have a good chance of being denied the first time through the gate.  We also know that we hear every reason in the book regarding why claims are denied.  In the end, there is no overall conspiracy against a group of claimants based on their impairments.  Each claimant is approved or denied for unique, if common, reasons.

And other reasons, to be sure…

Is a Mental Health Impairment More Likely to Qualify for Social Security?

Back to the original question.  Still, even after all this, it’s not an easy question to answer.

There’s no evidence that having a Mental Health Impairment will improve or decrease your chances of successfully achieving a disability or Social Security claim.  The only piece of evidence that could be viewed to support the idea is that 60% of SSI awardees have an MH diagnosis. But what the data really shows is that there is a very strong correlation between certain MH diagnosis and an inability to pursue SSDI.

The inability to pursue SSDI essentially makes it so that SSI is the only avenue for those claimants to pursue.  Having a mental health diagnosis won’t make it easier to get your claim approved for SSI, you just are part of a larger pool of claimants (and potential awardees) with a similar claim profile.

If you’re looking for a Social Security Lawyer in Spokane, WA or northern Idaho here’s a checklist of five things to consider. Are they…

7 Possible Reasons You Were Denied Disability

Should I Apply for Disability?